It’s Monday afternoon, and I’m not sure that I’ve fully realized what all I experienced this past week. It was a week spent in Boyle Heights with the people of Dolores Mission Parish, the poorest parish in the entire Los Angeles archdiocese. It was the best service-type immersion trip I’ve ever experienced, and this is why.

Every trip like this one has a certain amount of unsettling experiences, seeing poverty and brokenness, addiction and pain. L.A. definitely had that. Skid Row in downtown Los Angeles is packed with people struggling with addiction and mental illness who will likely never leave, because they have no vision for anything better. There was no shortage of unsettling there. 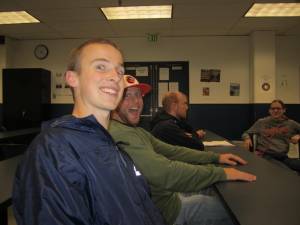 This trip had something else too. Boyle Heights was the epicenter of terrible gang violence in L.A. in the 90’s, and today it is a safe and beautiful community. It turned itself around because the people of the neighborhood, inspired and encouraged by Fr. Greg Boyle, chose to make it happen.

Their actions essentially ended the violence in the neighborhood, drastically reduced the drug trade in the area, and made a safe place for their children to grow up in. As a community, they found the one solution: prayer, courage, devotion to the Gospel, and selfless giving. In a word: Christianity.

The people of Boyle Heights were some of the most authentically joyful people that I have ever met. Despite all the hurt they have seen, all the lack of resources, and prejudices stacked against them, they are truly joyful because they have their lives and they have each other. They have little, and they constantly share that. They house homeless men in the church because they don’t need it at night and the gospel tells them to care for those in need. They treat every person around them like family, because that’s just who they are.

One woman who works at Dolores Mission Parish who spent a lot of time with us was Ellie, a relative newcomer to the area. She had worked for the Catholic newspaper in L.A. and was drawn to Boyle Heights specifically because she saw so many press releases coming from this one small parish. She was drawn to the vibrant community that did so much with so little and moved there when she got a chance (and when a job offer came up at the parish, she took that too). I have to agree with Ellie’s decision, knowing that I would never live anywhere in Los Angeles except Boyle Heights, as close as I could get to Dolores Mission Parish, where faith and life are no different.