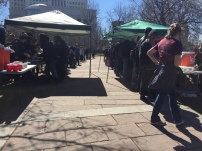 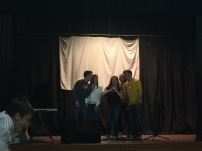 Tuesday night, after the last blog post was written, we had karaoke with everyone at Christ in the City. Many laughs were exchanged, and the grand finale included our very own Faith, Sarah, Layne, and Reed! They killed a rendition of Chicken Fried by the Zac Brown Band. It was a lot of fun!

Fast forward to this morning, in which we woke up and went to Mass. It was great!  Father John (a Capuchin priest from India) gave a homily about our dedication to our faith. He then went on to describe how we should, as stated in the first reading, pass on God’s laws to our children and our children’s children. He ended his homily with a statement about how we should not be afraid to have a boat load of children (not just yet… don’t worry mom, it’s not that kind of trip ☺ -Rose), in which uncomfortable laughter ensued.

Later Wednesday afternoon, we went to Lunch in the Park, which is a “feed” for the homeless population of Denver. It allows Christ in the City missionaries and mission troops to reconnect with our homeless friends that we had previously made as well as others that we were meeting for the first time. We were given the opportunity to engage in conversation with our friends while serving them a meal.

Allison: At Lunch in the Park, I spoke to two older men and friends, Bart and Steve. They emphasized the ungratefulness that many privileged people face. Despite the limitless opportunities that numerous families are given, we still find ways to complain about the small belongings that we lack. Steve has been living on the streets of Denver for 34 years, which has given him such great insights on the selfishness frequently exhibited by U.S. citizens. In our group discussions following the street walks, we talked about the difference between fulfilling physical and spiritual needs of our homeless friends. We are enabled to assist in initially providing physical needs (food, drink, clothing) to an extent, as it is often necessary before meeting other needs. We were made aware of our homeless friends’ need for relationships with others and a search for a deeper truth.

Rose: I spoke to Mark, Sam, and Frank and learned quite a bit about each of their lives. Mark spoke about how he’d moved around the US quite a bit and how he really fell in love with Denver, he and I became fast friends and he asked if he would see me at the feed next week and I had to sadly decline. Frank gave me insight on how suffering is good for people so that they don’t get caught up in material things. He and I spoke about Jesus and how His love is all we need, and we can get closer to him by serving others. Sam and I spoke about his life and how he loved Denver and his previous profession as a set designer and costumer, which is something I related to having a slight background in technical theater, and it was amazing to see his face light up, because someone was talking to him. You could tell by his eyes that not many people had spoken to him recently, but he had the most gentle eyes I have ever seen on a person. It was amazing to be able to connect with these men today, as well as serving those who I did not get to meet by name, but have a shared love for.