Special thanks to Firestone Complete Auto Care on N. Broadway in Denver for providing me with the free wifi needed to submit this post while I waited for not one, but two tires that picked up nails somewhere on the freeway in Wyoming to be repaired.

This morning we were invited to join the Christ in the City missionaries in their daily practice of attending 6:30am Mass with a community of Missionaries of Charity that also reside at St. Joseph Parish. In modern history no giant stands taller in regard to service to the poor and vulnerable than the foundress of the Missionaries of Charity, Mother Teresa (who while walking the earth stood at barely 5’0”). Born in 1910 as Anjezë Gonxhe Bojaxhiu and known as Sr. Teresa after her entrance into the Sisters of Loreto, she received what she described as a “call within the call,” on a train to Darjeeling which led to the founding of the Missionaries of Charity. During her life on earth, Mother Teresa both inspired and disturbed people with her unflinching commitment to the dignity of every individual person and most particularly society’s most vulnerable, including the unborn, those shunned due to physical or mental disabilities and illnesses such as leprosy, tuberculosis, and AIDS, and those society has left to die in the streets. After her death, Mother Teresa’s profile increased even more when her private writings (which she requested be destroyed upon her death, but the ethics of post-death publishing can and should be discussed in another forum) revealed that she had experienced a distance from God for decades. Again this invited criticism from those greatly discomforted or confused by Mother Teresa’s ministry, and a sense of solidarity for those many of us who know the feeling of starting out over vast horizons and wondering if God does indeed know us in the intimate ways the scriptures suggest. In spite of this “darkness and coldness and emptiness” that Mother Teresa first began writing about in 1957, her Saintly service to the world continued and she began each morning with her sisters in the presence of the Eucharist, just as we were invited to do today.

This particular community of the Missionaries of Charity was established in remarkable fashion by Mother Teresa herself, and is part of the incredible story of how Denver has become the seat of the New Evangelization in the US. Since entering the Catholic Church ten years ago, I have found the charisms and practices of religious orders and communities within them fascinating. Each religious order and communities within them establish specific operational expressions of spirituality, often called “rules.” Another way of describing how religious orders develop this might be to say that they establish the way in which the members of the community individually and collectively live in relationship to God and others. Being invited to join in the practices of a community is similar to being invited to the most personal areas of your home, and I am always honored when I am invited to do so. The opportunity to join at the Eucharistic table in the community’s small chapel with Carroll students was very special.

I wonder what in that experience moved them. Was it similar to what struck me? Did the thorns on the crown of the crucified Jesus remind them of the tortured he endured? Did the photograph of a laughing Mother Teresa next to the altar remind them of the joy which God intends us to experience, even in the midst of trial and heartbreak? Did they wonder if being 5’0” or under was some kind of secret requirement for entering the order after seeing the four barefoot women clothed in white and blue kneel on the floor in the front of the room? Did they wonder if the celebrant was part of the Capuchin community I used to rent a house from? (Okay, I am sure they did not wonder that, but perhaps they were intrigued by his brown habit?).

And were they moved to tears by the same names that I was? Sister Margherite, Sr. Reginette, Sr. Judeth, and Sr. Anslem. The four Missionaries of Charity who along with a number of others (including those they were caring for) were killed in Yemen last week. Did they contemplate the horrible pain the sisters in front of us must have experienced upon hearing the news? Did they wonder if their killing had strengthened these sisters’ commitment to their vocation, or make them question it, or both? Did they wonder if any of these sisters in Denver knew the sisters that were killed in Yemen? Did they hear these names during the prayers of the faithful and know who they were; did they see the names written on the small chalkboard next to the number that showed them which hymn to sing? 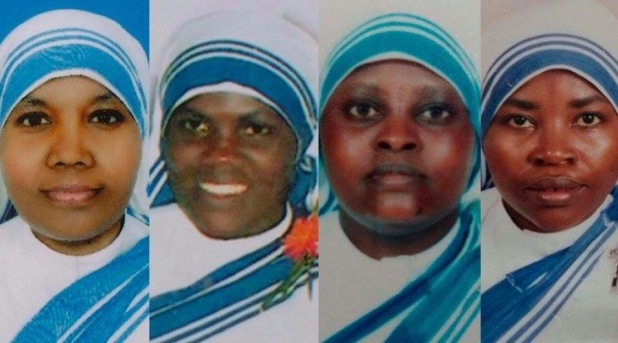 What a powerful reminder of the commitment that we are invited (and this is such an important word, because it is not forced upon us, it is something we must choose in each moment) to in our faith. Our Bishop Thomas of Helena has often stated that now is not the time for “lukewarm Catholics.” Sometimes in the developed western world faith is to conveniently lived out. Parishes are places where people get dressed up for Easter and Christmas. A cross is a nice piece of jewelry. People state that they are praying for another person when they don’t know what else to say. I don’t mean to say that there not people who live their faith in deep, purposeful, and committed ways, there certainly are, but I would count myself among the many who must accept the invitation to grow in relationship and commitment to God, and in doing so serve those around me more consistently and in more compassionate ways.

Is the crucifix not the greatest reminder of what this commitment requires? After all, that is one of the reasons why we as Catholics venerate the crucifix and not just a bare cross (whose simplicity and symbolism also certainly have their place). Perhaps. But this morning, contemplating the realities that people face on the street every day here in Denver but also all around the world, there could have been no greater reminder for me of the limitless commitment that God is constantly inviting us to than to see the names of Sister Margherite, Sr. Reginette, Sr. Judeth, and Sr. Anslem scrawled on that tiny chalkboard through eyes filled with tears.