This morning, after a not so pleasant night of unsettling food from the mountain villages yesterday, we had the opportunity to look at and purchase weavings done by women who lived in some of the villages up in the mountains. These weavings are truly a piece of art. I was amazed to see how colorful and how much detail was put into each piece. After saying goodbye to my fellow Amigos and Amigas as they headed out to play another game of soccer, I was able to learn more about the individual pieces that I was buying for my family and friends back home. Ana, who is a Sister here at the mission, works with the women from some of the poorer villages and is able to set up what we would call individual savings accounts for each of the women, in case they need money for their children or other needs. She explained to me that one of the coin purses I had picked out was done by a thirteen-year old girl, who was the daughter of one of the woman who regularly does some of the weavings. Ana said that the coin purse I had picked out was the girl’s first piece that she had ever done. 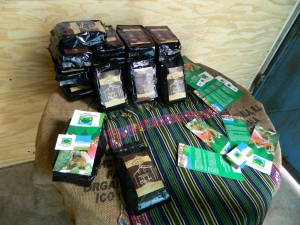 Putting that story to the coin purse instantly made it much more personal. Ana told me about another purse that I had picked out, which had been done by a woman who had fled from her village with her daughter. She did this in order to escape her husband, who would often abuse her with his machete. She left with almost no possessions and when she ran out of money, she stopped at a town where she was fortunate to meet a man who was associated with the Mission. This lead her to meeting Ana and the Mission was able to loan her money to get her started doing her own work. After hearing these stories and learning about the work Sister Ana does, I am not only excited to give these gifts to people back home, but also support something that truly benefits the women here.

Until next time ☺
Hayley

Read more from Guatemala
← A Visit to Pakaman
Monday Update →