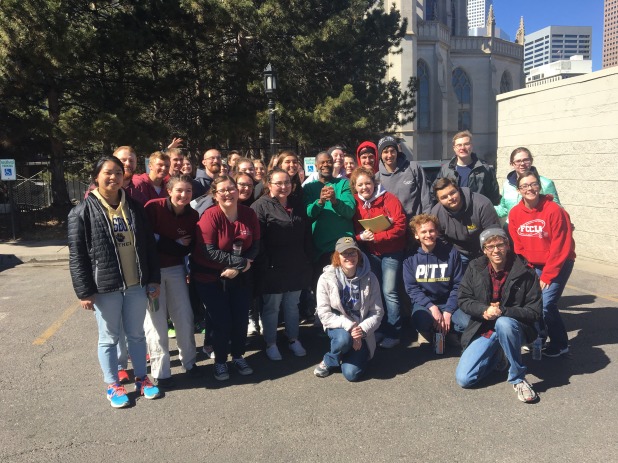 Today has been quite the swirl of emotions and experiences. Yesterday’s street walk was pretty slow, the wind drove our friends off of the street so we were not able to have many conversations. That was not the case today. Emma led my group on a walk through Capitol North and we must have had at least eight conversations. The most surprising aspect was the spectrum of homelessness that we experienced. I came into this trip with an ill-founded, preconceived notion that homelessness was stationary, and that most of them were put into their situations based on self-inflicted vices. As it turns out this could not be further from the truth. Many of these individuals were forced to the streets as a result of unavoidable circumstances. One of the most insightful conversations was with a man named Zachary. To give a quick overview: he has three college degrees, a passion for invention and a serious heroin habit. I was amazed that this man could be so intelligent and so cognizant of his addiction, but still be so powerless towards making a change. As we came to find out, his mother had also been a heroin addict, making him very predisposed to follow in her footsteps.   Ultimately, I realized that there was nothing of physical or financial nature which would lead to his change. The only way that I could impact his life was though relationship and prayer. This realization was exceptionally difficult for me to come to grips with.

One of the primary themes today (and for this whole trip) has been the healing power of relationships. It reminds me of the old adage of giving a man a fish. To give a friend on the street a dollar may help get them through the day, but developing a real relationship can change someone’s life. Unfortunately, this is easier said than done. It takes time and patience to develop these relationships, and sometimes they do not actually result in change. Claire told me the story of a young homeless who was contemplating terminating her pregnancy. The missionaries spent months trying to convince her otherwise and helping her in every possible way. Ultimately, despite their best efforts the woman still chose an abortion. This story really opened my eyes to the fortitude and faith the missionaries possess. Instances like these are why we must spend so much time in prayer asking for strength and guidance.

Perhaps my greatest epiphany was that loneliness and lack of relationship does not just impact the homeless, it is an epidemic which ravages even the most well off in our society. During the talk on community today, one of the missionaries shared a quote from Mother Theresa which said that loneliness is the greatest form of poverty in western society. This made me realize that while I may not have the opportunity to work with the homeless on a daily basis, there are those who I come into contact with regularly who are struggling with an equally real form of poverty. I only hope that I can come back from this trip and live my life in a way which is representative of this realization.

In short, this experience has been amazing thus far. I look forward to the remainder to the week!

As I write this post, I am listening to the missionaries practice singing for Karaoke tonight. The best part, is that they are singing Hamilton, which makes me love this trip even more! Since we walked into the doors of Christ in the City, we have been welcomed by strangers from Nebraska, Pittsburg, Florida, Texas, and many other states. It is through their presence and the events of today that I think Tuesday has taught me about vulnerability and the need to waste time with others.

I woke up this morning ready to participate in making breakfast. Bright and early, we started fixing food for the masses. It was nerve racking knowing that I am not the best cook (I have burnt chocolate chips in the microwave). However, these people all trusted in me with making a meal. I was not alone and as we jammed to music, it was easy to open up and try new things. Need me to cook hash browns? Sure. Need me to grate the potatoes. Alright. Need me to wash dishes? I got that! It was easy to be vulnerable and not have to worry about messing up or making a mistake. With the schedule of waking up early and fixing a meal for 70 plus people, I definitely was pulled out of my comfort zone.

After mass, we prepared for street ministry. I was with Madeline who introduced us to all her friends. However, as we walked through the library everyone was apparently out and about soaking in the sun. Denver is known as having at least 300 days of sunshine (don’t quote me on that), and sure did we get sunshine today! After a blustering first day of street ministry, there were many new friends to meet on the streets. The one that stuck with me the most today was Mike. Mike was an older gentleman who had a great relationship with another man on the streets. They even called themselves brothers. After a disappointing walk through the library, these men made our days bright and shared their story. Mike has three daughters that he put through college even though he was now broke due to the expense of tuition. He felt that this sacrifice was necessary and he talks highly with pure fatherly proudness in his eyes. Unfortunately, Mike’s wife died about six years ago from cancer, and for anyone who has lost someone, they can understand his pain. As he told his story, he teared up, warning myself and the others that we needed to be careful when it comes to cancer. He still tries to support the cancer research foundation through donations whenever he can. It was his tears that hit me. This man, who I did not know before today, was completely and willingly vulnerable with us. As I look back, there are times that I was never vulnerable with my own friends. I learned a lot from Mike and his vulnerability.

We also had a community building talk today. To build a community, we must get to know one another, and a way to do this is through wasting time together. When it comes to my life, I sometimes lack in this. As I look forward to going off to graduate school, I am also aware of the little, but precious time I have to get to know others and build relationships. Even today, as I tried to get a little bit of study time, there was always a new person, whether missionary, Carroll student, or a student from one of the other schools, who interrupted me (thank goodness!) and forced me to “waste time” with them. I am thankful for the interruptions and the push to not always being concerned with the future.

I meant to not write a novel, but oh well! It is only Tuesday, and with tired eyes and physical exhaustion setting in, I am excited for the days to come. Be vulnerable, uncomfortable, and waste time together!