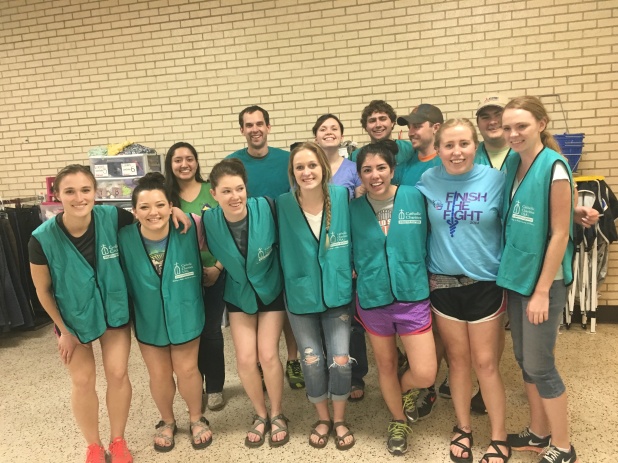 Hola amigos! Today, we started our morning with a beautiful mass at the Basillica of Our Lady of San Juan del Valle. The mass was in English (while they do offer bilingual masses) with a mariachi band that lead us in song. It was unlike any other mass we’ve been to before. After, we enjoyed some breakfast burritos at the cafeteria located next to the Basillica, we then journeyed to Sacred Heart, located in McAllen, to begin our service. At first, we toured the facility and learned about some of the refugees/immigrants and their stories. Since the first group didn’t come in until 3:30, we grabbed lunch and visited a park located right next to the river that separated the US from Mexico. After some reflection and good food, we headed back to Sacred Heart to begin our service. There, approximately 13 immigrants entered the building. We welcomed them with a well-deserved applause, warm smiles, and a big “bienvenidos” to acknowledge their journey to the states.

From there, the families sat down to fill out paperwork and talk about the next step to get to their final destination. Some were staying in Texas and others were going far beyond McAllen to places such as Los Angeles or North Carolina. After, they were directed to a table where the facility provided hygiene packs filled with toothpaste, combs, lotion, shampoo, etc. We then fed them with soup and tortillas while we asked about their clothing sizes and picked out a new and clean outfit for them. The families then had the opportunity to shower and get all cleaned up. Throughout this process, many graces were received and God’s presence was apparent. First off, not many of us speak Spanish, adding a frustrating but beautiful struggle to the way we all interacted and attempted to learn the stories of the families. The young children in particular were so full of joy, laughter, and life even in the face of the hardships they encountered traveling to America. The strength of the families was overwhelming, and learning about the realities they had been facing in their country and the means by which they traveled exposed our ignorance. We have experienced many emotions, learned many things, and are anxious for what the days ahead hold for us.