This is the youngest child back to blog again. I’m going to go a little out of order and reflect on something that happened yesterday (the day before the big soccer game). After playing the school kids in soccer and basketball, we got to celebrate mass with them. Everything was spoken in Spanish except for the music—it was in K’iche. We had a quick tutorial on how to sing in K’iche, which is a pretty difficult language to follow along with and speak. (I don’t know if we have told you, but K’iche is the native Mayan language spoken by the people here. For most, Spanish is their second language.) The music was my favorite part of my mass experience at the la Asuncion school. The children and teachers sing with such loud, full voices that are filled with excitement, joy, and passion. 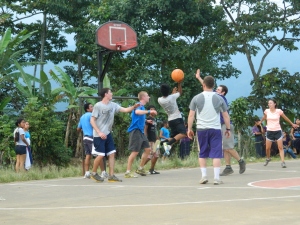 The singing during this mass is much different than any mass I have gone to in the United States; it was faster paced and very motivating. Their singing made me want to sing louder than I ever had at church before and I didn’t even know what I was singing or how to sing it! I thought their responses throughout the mass were much louder and assertive than back home too. Their overall involvement during the mass just made me excited to be there and excited to be in the presence of God and Jesus Christ. They got me excited to embrace my faith and inspired me to be more interactive and confident with how I express and share it with others. It was truly a blessing to celebrate mass with these students. I have to go change for the big soccer game! Talk to you later and I hope we will be able to bring you good news after our game(s)!