Buenos tardes! Kirsten and Ryan here to tell you about our day so far. Last night we turned in early. The girls are staying in the “brick house” and the boys are in what looks like a dorm with bunk beds and the bathrooms and showers outside. Before we left for bed, we noticed that the big spiders and cockroaches were out (“gross,” says Kirsten, “awesome,” says Ryan).

This morning we started with a yummy breakfast of tortillas, black beans, milk cheese, (which are actually paste/soup), yogurt, and cereal. We quickly got ready to go to the Clinica Maxena’s garden. It is a piece of land that is worked by local villagers who are seeking to promote sustainable agriculture for the many malnourished people in the area. A couple months ago, a group of students from Great Falls enlarged the area of the garden. We worked at clearing weeds and unwanted plants and digging an irrigation ditch. Ryan and I both cleared weeds. It was entertaining and a little difficult for us rookie gardeners to decipher which plants to pull and which to leave. For a while, we spent a lot of time pointing to plants and saying, “Bien o malo?” The women who are working at the clinic for the week packed us a big bowl of fruta, jugo, y pan (fruit, juice, and bread) which we snacked on. At lunch, we left to return to Santo Tomas la Union for lunch with the clinic staff, sisters, and even clinic musicians!

On a side note, traveling around here is a lot of fun! We ride in the back of trucks and wave to people who we pass by. 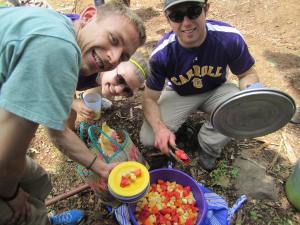 After lunch, we decided to get in a futbol scrimmage with the Clinica Maxena team. At first, we thought we’d just be playing “poppyfoot,” which is played in a court, with our group. Quickly, ten grown men joined us, and we moved to a turf field, playing nine-on-nine. While we proved to be younger and more athletic, they showed us up with their footwork, passing, and strategy skills. After a couple hours of playing, we ended with a score of nine to seven….US! So as exciting as it was to do so well, we’re starting to mentally prepare ourselves for our tournament on Thursday…and hoping that they don’t recruit too many younger athletes.

Right now, we’re sitting around, enjoying a bottles of Coke, and shootin’ the breeze. We’re looking forward to our next meal, which is sure to consist of more tortillas and beans! We’re having a lot of fun and really getting to know one another, sweating (a lot), and learning about the culture.

We’re thrilled that you’re reading our blog and hope that you continue with us each day!