Hey! Marcie, Stephanie and Jerraca here, checking in from Rochester.

Our trip all started at 4:30 am at Carroll on Saturday morning. We arrived only to find out that some of us are very heavy sleepers – I guess the saying goes ‘better late then never’, we all made it through security and boarded the plane in our matching Headlights shirts.

Headlights? Many quizmatic looks by passerbys in the airport. The herd in the grey shirts with the ‘C’ halo. A flight attendant questioned if we were a traveling cheerleading team. It then became a running joke that Dan Thies (one of our leaders) was the choreography coach. We may not have stunts, but we sure do have spirit.

All was well until we arrived at the JFK airport – until we realized that the airport is a lot bigger than Helena’s. Candie and Kelly somehow got separated from the rest of us and we were all running in several directions. Yikes! You know those people running in the airport helplessly dragging their luggage behind them? That was us. The cheerleaders frantically jogging to find gate B4. By the time we got there we were ten minutes late for our fight. Defeat. But after several minutes of walky-talky beeps from one New Yorker to the other, the airport staff quickly got us on our feet and told us to run… the flight had waited. 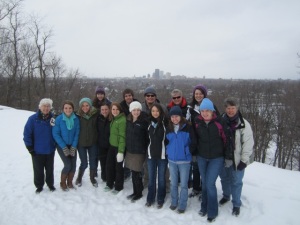 Stepping onto the plane we all were nervous that the other people on the plane would be frustrated by the delay in their flight. We walked back as fast as we could with our heads down so that we could get the half an hour flight over with. As we filed to our seats in the back, a woman that Katherine sat by seemed so over-joyed to see us. She extended her hand and her gentle heart asking our names, and she replied ‘Sister Loraine’. Coming back from a vacation, Sister Loraine is one of the sisters that we are staying with at St. Josephs. When we touched down to Rochester we were all so relieved to finally be closer to what we were called to do – serve others and grow in relationships and faith.

After four bags being lost and Candie and Kelly arriving two hours later, we were all finally eating dinner, laughing and reminiscing about the day and what was to come. Each of the sisters mirrored Sister Loraine in the love, joy, and sincerity of their hearts and lives that they live.

Here is to a beautiful week of service and transformation.